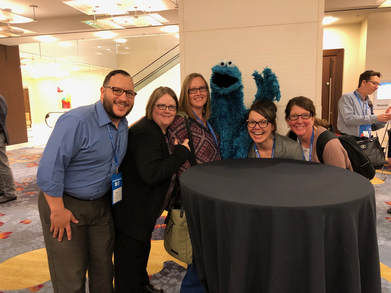 Teacher Ambassadors Ben Garcia--Oregon, Kari Wardle--Idaho, Nikki Vradenburg--Montana, Cookie Monster (honorary Teacher Ambassador) Darcy Bakkegard--North Dakota, Mekca Wallace-Spurgin--Iowa
Darcy Bakkegard, Prairie Public Broadcasting
Prairie Public Broadcasting welcomes North Dakota’s Teacher Ambassador, Darcy Bakkegard. Originally from Valley City, ND, Darcy is a ten-year teaching veteran who has taught in public and private, rural and suburban, and international schools. She has a B.A. in Theatre from Minnesota State University Moorhead where she spent five summers as a Straw Hat Player.  After working in educational theatre, she completed a Master’s Degree in Secondary English Education from the University of Wisconsin-River Falls and has been teaching high school English and Theatre ever since. Throughout her time teaching, she led workshops at the National Council of Teacher of English National Convention, the International School Conference of Turkey, and the Metro Area Tech Camp and served as a curriculum coach helping teachers integrate interactive teaching strategies into their classroom. Most recently she served as the Director of Theatre and English teacher at West Fargo High School.

Southern Oregon Public Television (SOPTV) is excited to have Ben Garcia aboard as the region's Teacher Ambassador. From 2010 through 2016 Ben has taught secondary language arts in Portland Public Schools (where he earned his M.Ed.); remedial English at the University of Aguascalientes, Mexico; secondary ESL classes at a private high school in Aguascalientes, Mexico; middle school ESL for an IB World School in China; and finished the last two years of his time abroad as a language arts teacher for the American School of Torreon, Mexico. Now that he is back home in verdant southern Oregon he is elated to be a part of such an incredible undertaking to support local teachers.

Nikki Vradenburg is the Teacher Ambassador for MontanaPBS. Nikki has been a classroom teacher since 2001 and has taught K-5 students at LaMotte School, a rural school in Bozeman, MT, in 1:1 Chromebook in iPad classrooms. Nikki is a National Board Certified teacher with a Master's Degree in Educational Leadership. She is a 2014 PBS Digital Innovator, a BrainPOP Certified Educator, is Google and Microsoft certified and was a finalist for Montana Teacher of the Year in 2017. She delivers professional development to teachers all over the state of Montana and has presented at national conferences including NCCE, ISTE and TIE. Nikki is also the co-moderator of the Montana Teachers Education Chat on Twitter, #mtedchat. Nikki is currently working on earning an Ed.D in Curriculum and Instruction at Montana State University.

Iowa Public Television (IPTV) is pleased to welcome Mekca Wallace-Spurgin as the PBS teacher liaison. She comes to the program with over 15 years of teaching experience, comprised of both the elementary and secondary. Mekca served on the district technology committee and was part of a team that was instrumental in the adoption of 1:1 devices. She made the implementation of technology a priority. Mekca has experience as an adjunct instructor at William Penn University teaching online courses in science. In addition to her teaching, she was a lead teacher in her past school district and was instrumental in creating the 21st Century classroom that is used extensively throughout her district. Mekca earned a Bachelor’s Degree in Education from Ashford University (Mount St. Clare College) and went on to earn a Master’s of Science Degree from Drake University with a concentration in Curriculum and Effective Teaching. Currently she is finishing her Ed.D in Instructional Technology and Distance Learning.

Kari Wardle is the Teacher Ambassador for Idaho Public Television. Before joining the IdahoPTV staff, she worked as an elementary school teacher, teaching 5th grade in Burley, Idaho, for 8 years, and a combined 5th/6th class in Clifton, AZ for one year. Kari served on her school and district technology teams and was instrumental in implementing technology throughout her school and district, including providing training for teachers. She has a great passion for empowering teachers with the knowledge and tools needed to bring their classrooms into the 21st century! Kari obtained her B.A. in K-8 Interdisciplinary Studies from Western Governors University and is currently pursuing her Masters of Education in Instructional Technology from Idaho State University.

About the Teacher Community Program
​